The beginning of all things are small

The aim of this work is to engage and stimulate an emotional response in the
viewer/audience by combining contradiction between initial aesthetic
attraction along with the subsequent message of single use plastic/waste
awareness.
This sculpture/Installation piece is just one part of a much larger undertaking,
THE BREADTAG PROJECT. This is an art/creativity, environmental/
educational/awareness project, that uses the commonplace, mundane
breadtag as its medium and symbol to draw attention and generate
discussion around single use plastics and plastic production.
Following a call out on social media, individuals, organisations, schools,
community groups etc, from all over Australia and the world, save and
collect breadtags and send them to me for this project. It would not be
possible without their mindful contributions, engagement and involvement in
this project.
The breadtag is a single use plastic that usually gets thrown away, sent to
landfill. It is usually made of plastic number #6, polystyrene, not easily
recycled and which breaks down into micro-plastics, polluting the land and
water, and posing a potential fatal threat to any fish, birds, animals that
ingest them.
But why worry about breadtags anyway? They are so small, surely they do
not pose too much threat? Really, they are so small, who really cares? Why
worry about them?
Like a beach made of millions of grains and tiny particles, you begin to add a
few here and there, or a few thousand here and there, and before you know
it there is an overwhelm of them. A huge problem. A massive amount of
unrecycled plastic. This installation visually represents how small things
accumulate into larger bulk. The breadtags as my medium tell the story of
excess waste, a disposable product in a disposable economy, where
convenience is no longer sustainable.
The artwork is created with saved breadtags to create new forms, aiming to
draw the viewer into a world both real and imagined, evoked by these
familiar objects interpreted in a new way. Their original use as and design as
closures has been extended by the mass assemblage, repetitive texture,
colours and shape.
The assemblages have created another layer of reference, with the forms
they create echoing environments and forms whimsical natural flowers and
growths, whimsy and fantasy. There is a reference here also to coral reefs,
and how climate change has caused mass bleaching of reefs, with only the
white skeletal forms remaining. This is another kind of environment, nature
recreated by totally man made structures.
‘Totems’ of tags, assembled, created with many single elements, these
pieces can be stacked, altered, morph in shape and height as desired and as
tags and wire frames are added to the installation, as randomly found and
donated, unplanned, unforeseen — giving the installation another organic
quality, with the irony of it being it constructed by totally inorganic pieces.
The viewer will perceive the mass amount of tags needed to create the work,
and allow reflection on the sheer amount of single use plastic that would
otherwise have gone to landfill…and still does. The hope is that this
promotes a visceral emotional response, and facilitates awareness and
discussion about the valuable resources wasted on such a low valued
mundane object.
RECYCLING COMPONENT and SUSTAINABILITY
This artwork is made of thousands of tags, clipped onto old wire framed
lampshades. All lampshades which have come from tips, hard rubbish or
opshops, collected and donated.
All breadtags have been saved and collected by myself and hundreds of
people nationally and internationally. Some wool sourced from second hand
shops has been used in their construction for stability. Nothing is new, all is
from waste that would otherwise go to landfill.
Many many hours go into the sorting of tags firstly into colours and sizes,
and are then meticulously onto the frames. Colours of tags are placed to
either are blend or contrast to create differing effects. It is labour and time
intensive, and a slow mindful process. Nothing rushed or automated, in
contrast to their mass production.
When creating the work, and concept, it was important to keep the integrity
of the breadtags intact, as at the conclusion of my project, the tags are being
donated to a charity which sells the tags to a recycler, in Robe South
Australia. This manufacturer recycles the tags to make usable products ,
and the funds created by this are used by the charity to buy wheelchairs foe
those in need in South Africa. I have been in collaboration and
communication with this charity for several years.
During the project, grass roots pressure and environmental awareness of the
single use breadtag created by the project has recently assisted and
contributed to the creation and introduction by Tip Top Bakeries in South
Australian and some bakeries in Tasmania, beginning a rollout of NEW
cardboard sustainable, compostable breadtags. 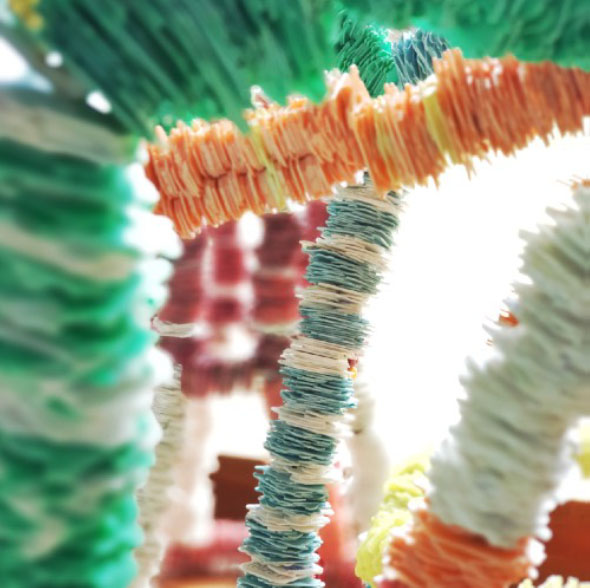